While I was oh so diligent, and almost demanded drill sergeant perfection (okay yes, admittedly very much so, not almost) in my training over the summer; goal in sight, for my attempt to sub 2 my half marathon, I did not put quite as much thought into the AFTER portion.

By after, I am referring to the fact that I will be running 5 more half marathons over the next 7 weeks. The next 3 weekends each have one, then a break, then another, then another break, and the final one. Now not only did I crush my goal on Sunday but I did so in such a definitive way by over 5 minutes that now I am feeling a little out of focus. What now?
That being said, I am also not 100% sure the best means to address my workouts during the week. Do I just run as I feel, what should my PLAN be? I LOVE PLANS. I NEED a plan. I feel so thrown off not having a plan of attack for the fall.

So with that, this is how my week has shaken out thus far.

Monday, a little over 4 miles at night – my attempt at “recovery” and not stressing my legs after the half the day before. Problem was my legs felt surprisingly fresh and I actually had to force myself home instead of turning it into a mid distance run. Every time I saw my pace creeping into the mid 8’s I forced myself back to reality that I should try running a little slower. But it’s good to feel good, right? 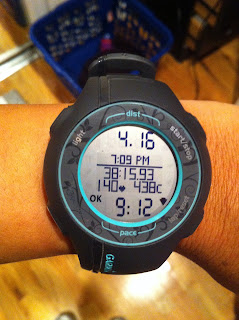 This was followed up by something I very much looked forward to having back in my schedule: lifting.

Tuesday morning – headed to the gym bright and early to pump some iron for an hour. I was a little out of focus there as well (more out of excitement – yes excitement I had missed weights!) since I didn’t lift for about 10 days leading up to the half (after that oh so mistaken killer session 2 days prior to the Bronx 10 mile which left my lower body sore for days). I wound up doing a total body workout circuit style. It felt glorious.

Tuesday night was a date night, so I took off. Look at me though, being SOCIAL. Wow. No two a days? Something strange is up. Had a lovely night, which also consisted of two glasses of wine.

Now, I used to be quite the drinker. However over the past 6 months or so I have very much stopped. So much in fact, I can literally go through the calendar and point out the dates since spring that I have consumed alcohol. I have noticed changes in my body as far as getting leaner, my running definitely appreciates the lack of alcohol and I do not miss it. Not to say though that there are not times that warrant some wine, and Tuesday night was clearly one of them.

Wednesday woke up needing to do some cardio (and also craving carbs like it was my job, thank you very much alcohol). Had plans to run at night so just went and did some easy cardio; 35 minutes on the elliptical, then lots of core stuff, planks are my friend! I did a 5 minute series of plank for 1 minute then rotating and holding a side plank for 30, back to full plank, then alternate side for 30 and repeat. Nothing to write home about, but I did get to catch up on some neglected magazine reading (I swear I have somehow managed to subscribe to every magazine possible and never have the time to read them). 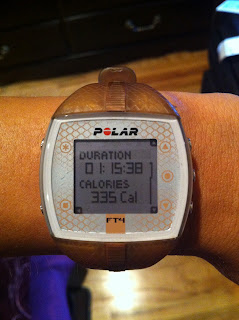 I proceeded to crave carbs all.day.long. It was awful. And then wound up so busy that by the time I was home to run at night I was very much at a calorie deficit and not at all properly fueled to run. Oh well. I run on fumes a lot (awful I know but my stomach just cannot handle it otherwise) so it wasn’t that out of the ordinary. I was just a little hangry going into it!

I started my run feeling terribly sluggish. I looked down at one point and saw that I was running almost a 10 minute mile. Even my long training runs were not that slow as of late. Now I didn’t really have any “plan” for this run but I knew I wanted to speed it up. The cure: a little Flo Rida and the pep was added to my step as I started running around 9 min miles for the remainder. I felt off the whole time (still blaming the wine) but my legs, the most important part of the equation, felt great. I have not “felt” the effects of the half marathon at all. Overall though a good 5 miles done.

This morning I headed back for some more light cardio and weights. Nothing special. A half hour on the elliptical followed up by bi’s, tri’s and shoulders. I was tired and unfocused. Just kind of wanted to be done. Actually, I kind of wanted to be running. But another date night tonight (oh more wine I suppose…) and plans for 6-7 tomorrow bringing mileage around 30 for the week, so wanted to keep things on the easier side.

I am running the Narrows Half Marathon on Sunday morning…with a few miles after with my friend who is in marathon training and running with me (and apparently I think that I am super woman and should just add on some “extra” to my half…sure why not). But Saturday plan on an active rest day, perhaps some yoga and also coming up with a more formal plan of attack for the remainder of fall so I don’t feel so lost about what to do and how to train with all these races on the calendar.

Anyone out there nuts like me and run a half consecutive weekends (4 to be precise before I have a weekend off from racing…) with advice? Would be much appreciated to hear of others experiences!
Posted by Gianna at 11:50 AM