I don't ever post anything non running related. But working for Al Jazeera America, I think this is too important. And actually just important regardless if I worked for them or not.

A little bit about it if you are unaware:

We are calling for the release of all five of the incarcerated Al Jazeera journalists. AJE has three under detention: Peter Greste, Mohamed Fahmy and Baher Mohamed. Al Jazeera Mubasher Misr's Mohamed Badr and Al Jazeera Arabic's Abdullah Shami have been locked up since July and August respectively.

With our Al Jazeera colleagues still detained in Egypt, and vital press freedoms still at stake, we are calling for a Global Day of Action today.

The worldwide campaign for the release of our colleagues continues to gain momentum. In the last several weeks, the EU and the White House called for their release, thousands joined protests outside of the Egyptian Embassy in London, and individuals on Twitter continue to raise awareness with the hashtag #FreeAJStaff. 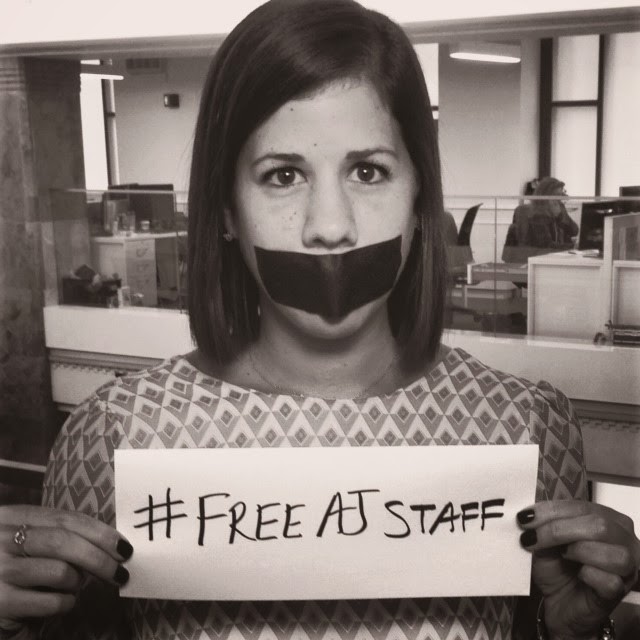 Posted by Gianna at 9:13 AM No comments:

Being Honest With Myself: Cleaning up the Diet

I don't think that it is any secret that after NYCM I was pretty much just done. I was tired of training, tired of being good, I was ready to kind of let loose and enjoy the holidays and a little bit of what I like to call "being a fatty".

I do not see anything wrong with indulging a little bit especially when you are highly active aka marathon training but due to undiagnosed stomach "issues" I stay away from high fat, red meat, and oily food as well as a lot of sugar in my diet. I do it because if I do not my runs will be miserable, and I will have stomach pains and never make it through a run without a stop.

So after several weeks of a little too much mac n cheese, wings, burgers, beer, wine and tequila (all of which were thoroughly enjoyed thank you very much), I started finally really running again. And, my runs were brutal. I was riddled with stomach issues and just felt incredibly sluggish. I was well aware of the culprit, my diet. Diet goes hand in hand with my training. I will never be one that can eat like shit and bang out an amazing double digit run. I can do that more with an alcohol hangover, but not a food one. I also have managed to gain a few pounds over the past year. Nothing drastic but I have been feeling it in my clothes and my workouts.

I had a hard look at myself and realized if I wanted to really start back at base building and feeling fit that I needed to clean up my diet. So I did the one thing that I said I would never ever do. I decided to turn to juices; specifically Juice Press. Now, I had no intention of stopping my workouts as I was ramping them up at the moment, so I choose to start juicing during the day, and then normal meals at dinner & snack.


And let me tell you, I have never felt more phenomenal. I decided to do it during the week the first week then stop on the weekends because I go a little nuts as you can see on the weekends. Saturdays I do body pump, then run a shakeout, then take a flywheel class. Juice will not cut it. Nor will it for long run Sundays.


On the weekend though, I can genuinely say I was MISSING the juices. I think I have been converted.

So here we are week 3 of incorporating a lot of juice into my diet. Due to a lot of work obligations I have been going on business lunches so I am not necessarily juicing all day through to dinner but I am still making the healthy choices of lean meats and veggies instead of oh burgers and fries and all that jazz. And I am finally feeling so much better.

My stomach hasn't had issues much lately and my energy is crazy. I have stopped drinking the 100 ounces or so of coffee I used to during the day (I will never EVER give up coffee, sorry not convinced) but I swear green juice gives me way more energy. I am also down a couple of pounds. However that probably is hand in hand with the fact that I am taking 3 body pump classes per week and running a lot more miles now. My workout intensity has increased as my eats have cleaned up so it isn't rocket science that the scale would start to move. But I am also not being a slave to my scale. There is more value in running a faster pace and for longer as well as upping my weights consistently - hello arms that are getting defined again!

So the moral of the story is as fun as it was to go totally off and enjoy whatever I wanted for a while, I love the way I feel when I am "behaving". I am back to bed early getting at least 7 hours most nights and waking up naturally before my alarm at 5 something. I love having a schedule again and feeling like the best version of myself.

And I love when I underestimate my running as I did this morning as I set out for some fun repeats and well I thought I would be dying and started out at 8:34 and was cruising. That was a good feeling to know I should have begun sub 8 that my fitness is returning.

I suppose being only 5 or 6 weeks into the new year that this is as good of time as any to start to discuss what I am up to and what I am planning for this year.

I am still trying not to look at 2013 with a twinge of failure. I keep trying to look at it as maybe not PR'ing in time but I accomplished so much in terms of distance. And, I learned a lot about how to train properly. But of course being as hard as I am on myself it is disappointing to know that I am just not where I want to be in terms of running.

Which leads me to my goals for Spring. Basically - there are NO goals as far as PR's and times. I have no intention of running anything more than half marathon distance in the first half of the year. And, I am not entirely convinced I will run one in the fall. After running 3 fulls and an ultra last year - and in the process losing a lot of fitness (I know that sounds weird but bear with my thinking here) I want to focus on getting that back.

I want to get back to where I was at the end of 2012. I feel that the second I started to focus on the full that I lost all that I had worked hard to gain in the half distance. Speed went out the window and even as I trained for the fall and my sub 4 goal I never felt fully confident in the speed. I am also over the weight that I was back then. Not by much but by enough to know that yes it probably does make a difference; so there is that as well that I am working on (kind of sort of as in don't have wings and beer night more than once a week. don't judge).

I took a pretty good amount of time off from really running. And I am still not at the point where I am logging a lot of miles. I am 100% easing back into it all. For a while I did a ton of Flywheel classes and cross training. A few weeks back Les Mill's Body Pump came to NYSC and I have been consistently taking 3 classes a week since it launched. I am feeling stronger which is a great feeling. I miss feeling strong. Then I have been doing cross training and running a few times a week. No crazy mileage yet though. I did a "long" run last weekend of 7 miles. Weird to call that long when I was doing 10-12 as my mid week run during marathon training but that is where I am at.

Now, I am running some races in the beginning of this year...I got into the NYC Half during the second lottery round, the Cherry Blossom 10 Mile as well as the Brooklyn Half Marathon. So yes I am preparing for that distance. But, I do not have a single time goal for any. I am not prepared to PR by any means (1:53 for the half) and there is no pressure to. NYC Half should be an amazing experience and Brooklyn Half was one of my favorite races last spring. Also a few other shorter NYRR races have hit the calendar this week in a registration blitz. Oops.

I have skipped a planned run if I didn't feel like it, and am actually enjoying the ones that I am doing. I want to not rush myself into shape and then just not enjoy it. I was so over running at the end of the year and that sucked. I want to WANT to run. I want to LOVE the run.

So there we have it. That is what I have been up to lately. Spring equals rebuilding for me. No pressure. Just build back up and have a little bit of fun with it. I think the second I started to put so much pressure on myself to perform was the second I started to fail. I remember having this idea of going "sub 2" for the half marathon in the fall of 2012 - and then proceeded to run a 1:54 without having obsessively geared every run to pace and effort and structure. I ran. And because I ran blindly I think that is where the success was. I am not going to throw away all I learned about tempos, intervals, ladder, pyramid etc workouts but I am going to relax myself for a while. I don't expect much in terms of performance but I would like to end spring feeling strong and confident again.

Now if only it would warm up and de-ice outside - I would really like to hit the pavement (even though I honestly don't hate the treadmill).
Posted by Gianna at 4:14 PM 1 comment: