So today I finally checked off something that has intimidated me for the longest time: I ran sports bra only.

Now, I may have done this not only at 5am but also at the beach where I am pretty unlikely to run into people I know. But I did it. And man was it liberating. I also did it in my tiniest short shorts. Doesn't get more naked than this. Go big or go home....errr something like that perhaps more me being a fan of matching. 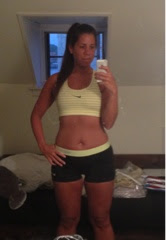 I by no means have abs (unless in a certain light combined with a certain degree of dehydration - then I have some baby abs ;) or any sort of mid section that is enviable but this fear was spurred into action this weekend for just that reason. I do not think I am fat (although I jokingly make fatty comments about my never ending runger) but I do know my short comings.

Each week running along the beach there are hoards of men and women of all shapes, sizes and degrees of being ripped and I find myself not JUDGING them rather wishful that I too was rocking a run sans sweaty shirt weighing me down. So if I am envious of them I should stop worrying that people are judging my physique and just get on with it.

And couldn't be happier. This is not to say I will be heading out sports bra only for all my runs now. There was a definite level of self consciousness that I will need to get over that I can't have when trying to hit an important run.

But this mornings run was an easy shake out with strides in race prep for tomorrow so I know it was a perfect time to test it out.

Although I would like to say "easy" was how the run was supposed to be. This was one of the shittiest runs in a while. 95% humidity at 5am I felt like I was running underwater, through quicksand with dead legs. Not an exaggeration.

But isn't it so pretty? FALSE ADVERTISEMENT. Stay inside. 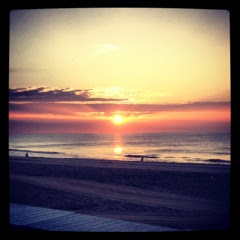 I digress...the joy of not having a sweaty top stuck to me may just be in my mind next time I am debating an unhealthy treat. Since we all should know by now that you can do abs all you want but they won't be revealed until you lower your body fat percentage.

Post Run: Exhibit B - I sweated ALL the sweat today 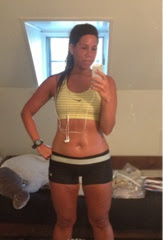 I would love to get to the point where I 100% don't care but for now...I've done it and survived and did not feel judged by anyone. I was actually more conscious of my breathing than what I was wearing.

And overcoming a fear...THAT is a perfect way to kick off the week.

Not to mention a little less laundry ;)