You've trained for this.

That was my mantra today.

But, let me pick up from last night. After managing to clean everything I could somehow it got to be dinner time and finally could just start to relax and focus on the fact that in 12 hours I would be heading to the race. I wound up having some turkey breast, a wrap, and taboule for my dinner. I still laugh that my wraps are low carb. I kind of ate my weight in peanut butter filled pretzels so wasn't really that hungry. I downed about a liter of water and then stopped all consumption at 8 so that I had plenty of time to digest it all. My stupid stomach is notoriously just awful with running. I was in bed by 9:30 and just watched tv while I drifted off to sleep.

I slept surprisingly well considering I have been amped up about this race for the better part of 2 months. Woke up to my alarm at 6 and wasn't really hungry which wasn't that great of a sign. I made myself eat a handful of the peanut butter pretzels (a hardship, I know) and guzzled some water. I was slightly concerned about the state my stomach was in but figured it would settle itself.

I'm not entirely sure how (well correction, yes I am, but I am always surprised by how I manage to procrastinate on race mornings), but I managed to dawdle enough so that all of a sudden it was 10 to 7 and I had not gotten dressed or packed my bag and had to leave at 7:15. Commence rushing around to head to the light rail. Ran out the door and got to the light rail on time and was in Jersey City by 7:40 with a race time of 8:30.

I have to say...in the beginning, seemed plenty organized. I got my race number without a hitch, got my shirt and safety pins and walked to the side to pull myself together put on my bib etc. By the way, how awesome is this - I love having a low number! Yay for alphabetized numbers! 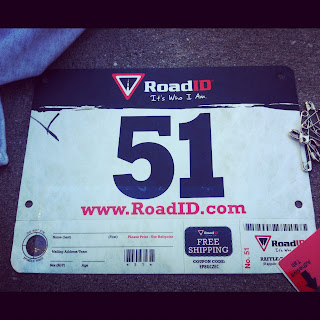 I should mention it was damn cold and windy. Teeth were chattering a little bit. I did not want to take off my long sleeve tech shirt. I wore shorts and a singlet today - same one that PR'd the Bronx 10 in, figured it might make me lucky today as well! Had time so had a Gu around 8, packed my spibelt, pinned my bib and added some songs to my current favorite playlist and then went to find baggage drop.

Insert chaos. Holy line. But figured it was a half hour before the start how long would I really be standing there. Yes well unfortunately I was in line until about 8:25 or so and still had to make a bathroom pit stop. I was also eerily calm. Just chatting with the ladies in line with me, handing out Gu's to a couple people that forgot them (because my bag is always JAM packed with supplies, I am like a soccer mom with that). I would like to mention I am always inspired by the people around me. I was standing in line with this group of women easily all over 50 (and I am being generous with 50) all kick ass runners and do races together all the time. I want that in my future. But I digress.

So after all stops are made, walk to the start, insert myself at the front of the 9:00 pace pack, make sure my Garmin has a signal and in a few minutes, we were off.

The beginning of the race is pretty open so I didn't find it TOO difficult to start to  get on pace. There were about 3,000 pre-registered runners I believe and the beginning is on the road so there was a bit of room to settle in. I looked down at my garmin after a few minutes when I felt comfortable and as if I was on pace, and saw that I was under 9 already. I tried to reign it in so that I didn't go out too eager but at the same time my heart rate was around 120 so I knew that I wasn't pushing it by any means and was warming up.

Honestly, the first few miles just flew by. I knew I was excited and my goal was to just make sure that I wasn't being stupid and adding speed that I wouldn't be able to maintain. This was also my first time running this course and not being familiar was just trying to be aware of the terrain and it is apparently notorious for being "extra" long so tried to concentrate on running the tangents since there were so many turns, and a few quite abrupt. I should also mention; the wind gusts. MY GOD. Not cool. Seemed extra windy today. Thanks.

After mile 4 I knew I could up the ante and increased my pace. Also there wasn't much wind and I had a feeling that when we got back to the water front (we were in Liberty Park at this point) that the wind would come back to play. Prior to the park there was nothing scenery wise to note, but once we got there it was nice to have some scenery versus running the streets.

I continued to up my pace for the next few miles. I was definitely feeling good. Didn't feel like I was pushing too much. Had minor concern that I did so prior to half way through but figured I felt good and should go with it. I was checking my Garmin periodically and it was telling me that I was in the mid 8's quite a bit and I have to say I didn't trust it! And also would look at the clock at the mile splits and me and my awful math thought that I was off pace to PR for the better part of 9 miles. Have I mentioned mental math is not so much my strong suit? It was easy back when I was pacing 10 minute miles!!

I never got to the point of "I wish this was over, why do I do this" BUT my stomach never settled. I knew by 2 miles in that I would not be doing any sort of intake during the race if I wanted to make it without a pit stop. Around mile 10 I was definitely getting a little scared by the rumbling but I slowed slightly so I wasn't pushing quite so much but still under goal pace.

I also knew that if I held on, I was about to PR, and PR in a major way.

Those next few miles were a bit rough. The wind was in your face, I felt like I was fighting to keep on pace and ran my slowest mile at 13 between the wind and my stomach. At this point I knew I was under 2 and made it my goal to get under 1:55. I knew I had slowed at mile 13 and with the last quarter mile to go started to just pick it up like crazy. I had this.

And check this out:
﻿ That is "unofficial" so maybe didn't get under 1:55 (at this time still waiting for the race results to be posted) BUT holy crap. Considering my former PR from the end of March is 2:07:33 - we are talking about 13 MINUTES. Update, the official results are in and YUP. Here we have it, 1:54:37. 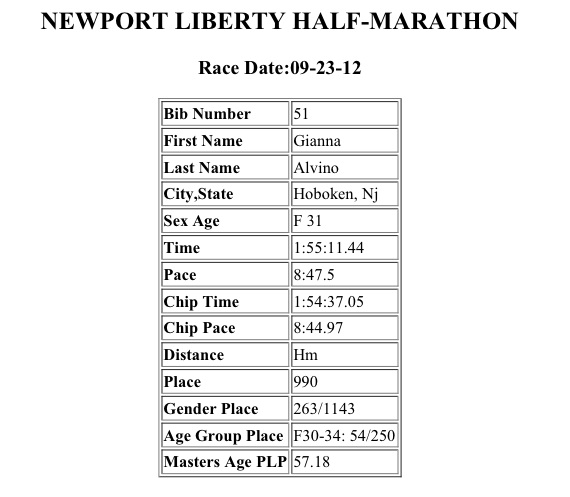 I am speechless. I kind of don't know what to do with that. I am pretty happy with my splits as well:

I mean, but seriously. Blown away. I don't want to sound cocky, but I didn't really doubt that I would hit my sub 2 goal, but I did think that it would be a bit more of a struggle or on the close side.

This is a testament to the past few months of focus and training. Dropping a full minute from my average pace? I mean just awesome. And accomplished in 5 months time. Actually less considering I was sidelined from running for about 6 weeks (which actually had me focusing on strength and nutrition the most, a blessing in disguise).

So, while I definitely threw myself a victory dance party prior to and during the shower, there is also a part of me that is thinking: what next? I know. I should just be basking in the glory of conquering a goal but that is not me. I thrive on goals. I suppose now my goal perhaps should just be making it through the next five half marathons and various other races over the next several weeks in one piece! I don't think I will "race" for time in the next couple as far as trying to beat this but will be a goal to stay sub 2 hours.

Now time to find food since all I've manage thus far is a banana and, obviously, pumpkin coffee. Feed me. Now. And stomach let's work on behaving. Mmmmkay.
Posted by Gianna at 2:58 PM