This weekend I had my first race since NYC Marathon last fall and my Crohn’s diagnosis, The NYC Runs Narrows Half Marathon. It has been a really long and tough road back but I finally feel like I am coming out on top. My doctors still say to not be complacent where I am at because I will improve further, but MOST of the time, I feel better than I have in a long time. 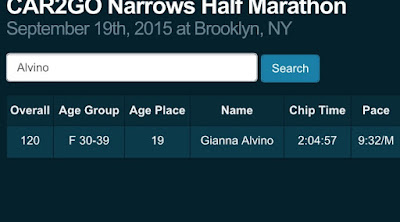 Food wise, I went on a high carb, low fat/fiber route. I lived on banana oatmeal, turkey sandwiches and pasta for three days. Basic stuff that would hopefully keep my gut happy. And maybe I had a half glass of wine Friday night, which had me going to bed a bit scared because my stomach felt AWFUL.

Woke up Saturday with lots of time to do my thing and get out the door. Started drinking water and ate a plain roll on my way to Brooklyn. Also took an immodium because I figured, can’t hurt. Was feeling more nerves than anything.

I was stressing because there is only a bathroom at the start and it is a double looped out and back. You turn around at 2.5 and 9 miles. So not a single bathroom to be had while racing #scaredshitless in no man’s land out there!

I can’t not mention the weather. It was a swampy mess. 89% humidity. I knew this would be a race run on feel versus hitting a pace. 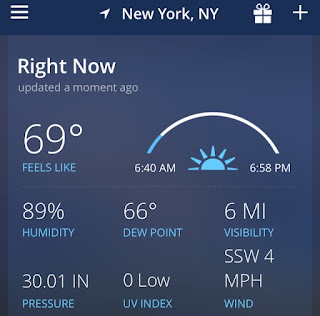 The beauty of NYC Runs races are the size. I think there were less than 200 people. At 8am with minimal fanfare, we were off! 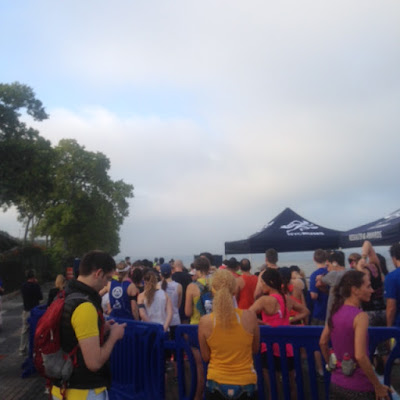 We were immediately running into the wind. I start strategizing and want to maintain an easyish effort and make sure that I am not exhausting myself against the wind. Find a couple people who seem to be doing my pace and plan to keep them in my sight.

Hit the turn around and immediately feel the wind fall off. It is nice, try not to pick up the pace too much since it is still early on. I want to be on cruise control. Also scared that pushing it will cause GI distress. Running pretty easy still.

Running into the wind again. At this point I am on a mission to get to mile 9 turn around. I want water but do not want to ingest anything until we are on the way back. My underarm is chafing like a mofo and I am slightly miserable by that. Still have my little pacers in front of me. I start questioning life choices in running as I am not half way yet. And THIS is what it looked like: 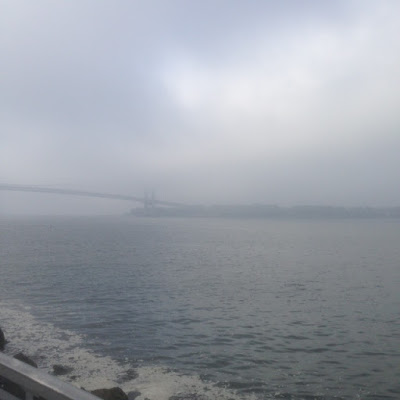 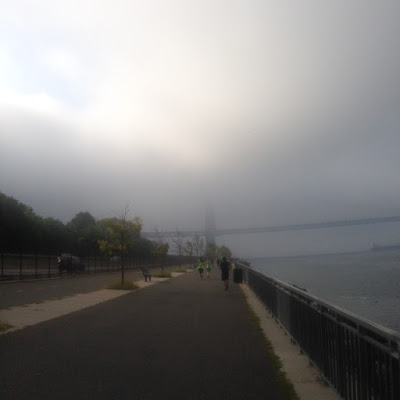 Water! Sweet, glorious water. I walk through the water stop to drink down 2 cups and make myself stop so I am not sloshing around. Start running again and get a burst of energy that the end is near. My clothing is DRENCHED. My shorts are literally dripping and my socks are soaking wet. I now decide that I am going to be okay (stomach wise) and it is time to start making this a race. I begin reeling in those pacers in front of me and picking them off. I am never able to do this at the end of a race and it is a bit of a rush.

Definitely exerted myself too early. I am now tired. I am feeling the need for fuel. There is water station around 11.5 and I ask for “waterade” can we say dehydrated much? Lol. I take a water and Gatorade and continue on. I basically fartleked the rest of the race. My legs were pretty shot. With one mile to go we come into a 5K race sharing the course with a bazillion people run/walking at me. They would not move so I am stuck weaving in and out of them. Angry thoughts are circling through my head.

I cross the finish line and eat all the grapes and drink all the water. I saw bagels and have never NOT wanted a bagel more in my life after all the carbs the days before. 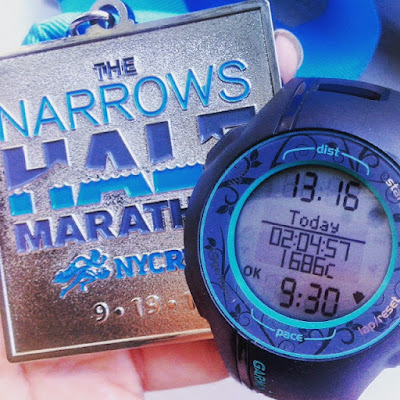 I cannot be more thrilled with how this race went. Both executed based on conditions, not walking when it got rough out there and how I prepared the days before (and dear everyone who tells me to go gluten free with Crohn’s – considering how well I responded to carb loading I would say there is NO problem there for me).

I felt better about thinking how much humidity played a part stumbling upon a depressed man who ran a 1:24 and the race shot his confidence for sub 3 for NYCM. It was killer out there.

I think in another 6 weeks or so that I should get even closer to 2 hours. But for now I will bask in the glory of the first healthy race I have had in YEARS (my 1:53 PR is WITH a bathroom stop even).

And spent the rest of the day stuffing my face with multiple salads! Good lord I missed greens. 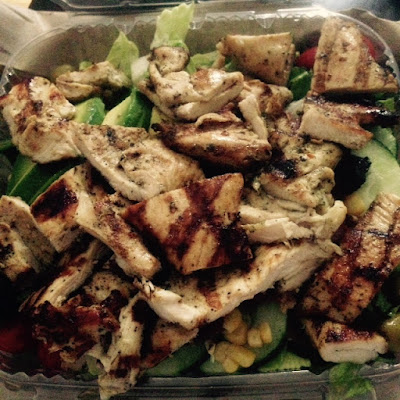 Overall, loved the race and the people that run them. My confidence has skyrocketed. I don’t know if there will ever be a day when I will 100% trust my gut to behave but success on Saturday has put me one step closer.

And good lord it feels good to recap a race. A GOOD race.
Posted by Gianna at 10:23 AM 2 comments:

Today is NOT Friday - TOL

It has been a while but since I am a lazy blogger I though that linking up for Thinking Out Loud to share my ramblings this week would be a good idea. Lucky you.

First up, I thought today was Friday until I got a reminder at 7:00am to complete payroll approvals. So there is that. I guess it has been a while since I have worked a 5 day week and my body, and brain, are a little confused. I think I need to use up some more of my 3+ weeks of vacation.

I would also like to note that I am an idiot. Tuesday when I went to run my Garmin, which was hooked up to the charger, was dead. I pulled it on and off the charger and nothing. I said f it since 5:30am is way too early to deal with those shenanigans and did my speed workout on the treadmill instead. Proceed the next 48 hours through to this morning unplugging and plugging it back in and it remaining dead. Today I had the brilliant idea to change the outlet the usb is in...it is now charging itself. So yup, idiot.

Which leads me to the fact that I am running a half marathon this weekend. I have been a little mum on the whole thing because I have NO clue what to expect. Thinking my garmin was dead I was contemplating running it blind BUT if it is working that will not happen (because, data). I am stiff this week and legs feel dead and that is with me tapering back mileage and taking TWO rest days leading up (Monday/Friday - race Saturday). It will still be warm out so I know that will slow me down. I would really like to hit 2:05ish. Goal is to get close to 2 this fall (more on deck in October/November) and sub 2 when I run NOLA.

Oh wait have I not mentioned I am running the New Orleans Rock 'n' Roll half marathon? I am. With Team Challenge! (post for another day too).

Can I also talk about how mentally challenging it is for me to take a rest day? I do not work well with laziness and definite guilt starts to creep in. I know that whole recovery thing but still taking a day off messes with me. Forget taking two off like I am this week. HOW do people not workout?

On a different and unrelated note, I am starting the countdown to my cruise. It is in December but as I realized the remaining payment is due I got really excited! Hello to sailing the Caribbean! And then another several days in Florida. It is going to be a glorious 2ish week escape of NYC winter! (#alltheexclamationpoints)

And now off to eat my pumpkin oats and drink my pumpkin coffee, because as much as I tried to resist, I want ALL THE PUMPKIN. But never a pumpkin spice latte because those are disgusting. Sorry, not sorry. Hate that sugary stuff.

August - A Month of Running Happy

I haven't really recapped much about my running in detail on the blog, just mentioned that I am running quite a bit. I have a loose plan most weeks of 2-3 quality runs: tempo, speed/hill and long run. The rest of the runs have just been whatever. For the most part I like to "workout" for at least an hour most days which has translated into a lot of days hitting 6 miles or so.

Nevertheless, I was kind of surprised when I saw my mileage for the month and it was 179 miles!

I have not run that volume in quite some time. From what Daily Mile is telling me in fact, even last year in my Chicago and NYC marathon build up I wasn't running that much. Although to be honest I didn't look back further than September because I am lazy. 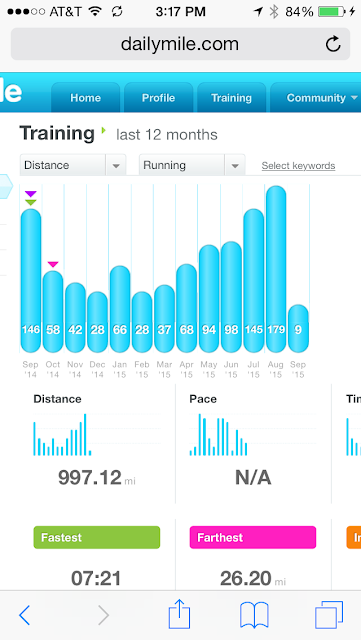 But August was pretty awesome for running...

I was away in Montauk which translated to my first real run since NYCM outside.

August means summer streets and me further getting comfortable with breaking free of the treadmill. 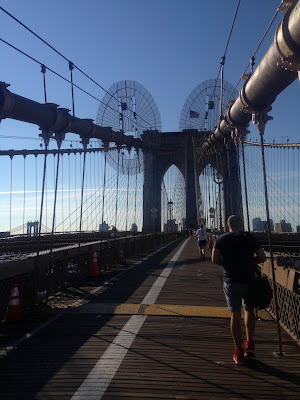 More than anything else though running became less anxiety filled over my stomach (not without a couple dicey runs that ended in less than ideal situations...but I blew those off immediately) and a lot less frustrating. A short time ago 11-12 minute miles on the treadmill were hard. I've managed runs outside in the past month busting out miles in the 8's and steadily in the 9's. I know pace isn't everything but good lord it is satisfying.

AND I finally feel ready to take the plunge back into races. I haven't raced ONCE this year. The past few years I have run 20+ races each year but this time around I just didn't want to waste the money not knowing how I would feel.

While I am not in the least bit thinking I will be throwing down PR performances (because sub 1:53 half marathon is kind of doubtful right now) I want to get through them feeling good and strong.

I have 2 half's planned right now and have not problem saying that I would really be thrilled to break 2:00. I haven't since fall 2012. That is ridiculous.

If things on the Crohn's front continue to be positive then at least I can get through them happy if nothing else!

But thank you August for a great month. Everyone else might have been bitching about the never ending heat and humidity but every day that I was well enough to wake up and chase down the sunrise, I was happy.

How can this not make you happy? 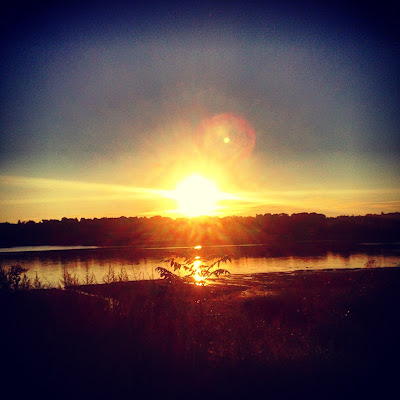 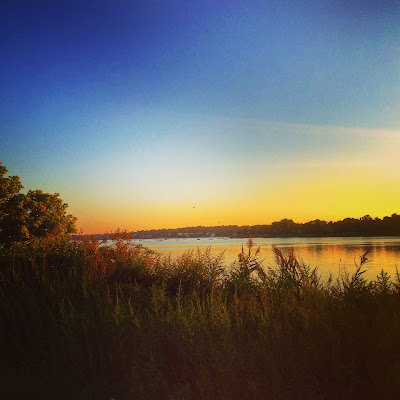 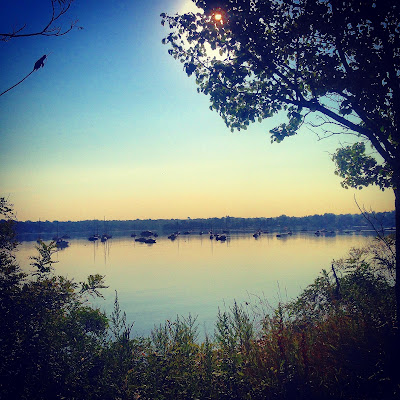 September, I'm coming for you.
Posted by Gianna at 3:53 PM 2 comments: