Another weekend, another half marathon.

This one took us to Brooklyn for a smaller race put on by NYC Runs. There were only about 300 people racing and this one was without a lot of the bells and whistles. This was refreshing and on the flip side also almost my down fall during the race... 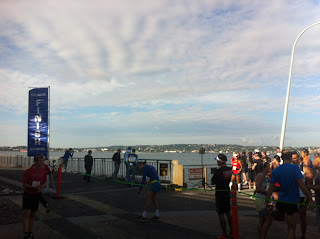 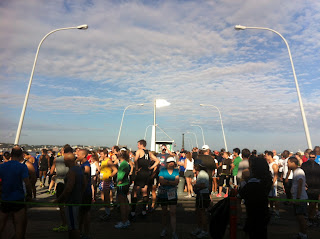 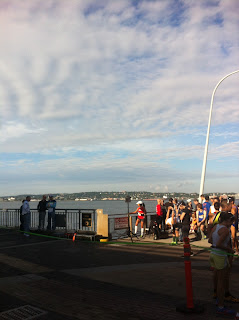 We surprisingly arrived an hour ahead of the start. Shocking considering our usual dash so decided to stay in the car and stay warm while we waited for it to get closer to start time.

However, in our decision to sit in the car all of a sudden it was 20 minutes before the start we were a 10 minute walk from it and both needed our race numbers and a bathroom pit stop. End result - beginning the race a minute and a half after the gun went off. Typical. Even when all the odds were in our favor. We just can't get it together!

So the route was pretty nice. Along the water in Brooklyn - Shore Road - and was comprised of two loops: the first 5 and the next 9. Not too bad and always nice running along the water.

I was kind of laid back going into this race. There was no "pressure" to perform to any standard. I wasn't going to actively go for a PR so went in with no plan just to run based on how I was feeling. I did know that I would of course want to come in from now on sub 2 hours since I proved I am capable of running quite under but other than that was just going to start running and take it from there.

After running for about 5 minutes I looked at my Garmin to figure out where I was settling and right away was sub 9 minute miles hovering around 8:45ish. I did try to back off a little but just kept running by feel. The first few miles went by quickly. Was enjoying the morning and just happy to be running as I have backed off this week and only ran M/W/F it was feeling good.

After the turn around for the first out and back I decided, that I would grab some water. This proved to be a big mistake. Last night I wasn't really doing anything to "prepare" for the race such as eating anything specific (perhaps I took "carb up" a little too extreme with ohhh about half a box of cereal), hydrating etc. This morning I had a bag of pretzels that were in my bag from a previous post race and a bottle of water + nuun.

Within a couple minutes my stomach took a turn for the worse. This is something that I continue to struggle with, my stomach acting up on runs. I spent the next 8 miles just praying for a bathroom to magically appear and wanting to finish the race. Not the most comfortable way to be running. I actually had to stop dead in my tracks a few times and take some deep breaths before it settled to start up again. Perhaps TMI sorry! But since this was a small race, there was not a bathroom to be had. Nothing along the route. It was torture.

On the plus side, I did get to take some lovely pics of the views we had while running!


When my stomach wasn't acting up though my pace was feeling really comfortable in the mid 8's. If I had not actually stopped all those times, I probably would have beaten last weeks crazy PR which is exciting. My running has drastically improved in the past few months and it's nice to know that I can run these consecutively so well.

One thing I did find difficult was finding people who were on my pace. I actually spent a good portion of the race mostly solo. So in that respect it kind of felt like a training run and not actually a race. I like races because you have people around you to give you an edge and push yourself and also aid in the excitement factor.

Overall though not too shabby for my splits. Especially since on the way out there was no wind but each time we turned back we were slammed quite a bit with wind in the face. The run itself was extremely flat. I look forward to running this route again in the spring. It's a good one to race. You can tell that mile 10 was where I was really struggling. I think I was planning on running across the highway at that point in search of a restaurant for a bathroom!

﻿So two weeks, two half's down. I am feeling good so far. We will see how I am on the recovery run tomorrow. Two more weekends before a weekend off from a race. Kind of can't wait. And not going to lie, I am probably going to go for a PR if the conditions are right and my body is feeling up to it. If only I could get these stomach issues and fueling thing down I think I would be really golden. But that, like running in general, is a work in progress. One day one can hope I can get through a race without that dreaded, oh my god, I need a bathroom now kind of panic.