This post comes to you from my lovely hotel room in Trenton. Also being blogged from my phone do forgive formatting and pictures since I know they come out funky until I am on my computer.

I left work a little early today to hop on a train from the city down to Trenton. Turned out to be a whole lot easier than I anticipated. I got to take a little nap, it was not crowded at all and a few dollars for a cab later was at my hotel. The hotel however was not ready for my arrival - I didn't give them a hard time. They asked for an hour (they were at capacity) so it was plenty of time to leave them with my bags, and head over to the New Jersey State Museum to pick up my bib and swag bag.

It was a nice 10 minute stroll or so from the hotel which was nice to stretch out my legs. I arrived to no lines and decently organized stations to pick up your bib, bag and a couple expo tables. I spent the majority of time chatting with fellow runners. I love being immersed with runners. People that do not race just don't get it. It's hard to explain how you are excited to wake up at the crack of dawn and run more miles in one shot than many people run in a week. Oh and you pay to do it. Can't stop, won't stop though. I love it.

After an hour or so I headed back to the hotel where they were thankfully ready for my arrival. Quick check in later (and free room thank you Marriott rewards!) and I was settled in my room and ready to order a quick dinner. I decided on pizza but have to admit I couldn't really eat it. It was alright but I just never really eat pizza anymore. I literally cannot remember the last time. I wound up eating mostly just the crust and sauce. No need for too much cheese to mess with my stomach!

So here I am now all cozy in bed watching Transformers. Random I know. My clothes are laid out for tomorrow. Alarms are set. Water is being consumed.

Ever since the Verazzano Festival Half was cancelled I have started taking tomorrows race seriously. I gave myself a rest day, didn't do too much mileage so far this week - at 21 so far, I think I have a good chance to PR tomorrow. My plan is to go all out. I would like to beat my Newport time and end my half season on a high note.

I figure the worst that happens; I don't PR. I've had bad races recently with multiple bathroom stops and if I am honest with myself I know it is because I have just been winging it. So here I am race tomorrow and I have kept my foods to very boring the past few days. Let's hope that combined with an easy running schedule this week work in my favor!

Time for my lame and excited butt to go to sleep. I don't think this racing thing will ever get old!! 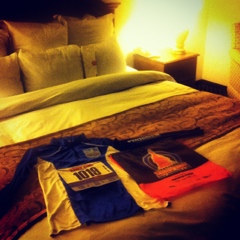 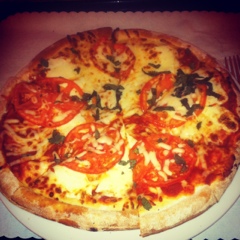