I am coming off a fantastic 3 day weekend. Friday I took off as it was the wedding of one of my dearest friends. She and her husband embody the relationship I think everyone wants. They perfectly complement one another. I definitely got teary eyed on multiple occasions – she was living with me when they began dating and he pretty much lived with us within the month as well, so I very much had an inside look into the relationship and watching it develop. Just beautiful.

Enough with the mushy stuff ;-)

Let’s just say that the wedding was quite the spectacular event. Gorgeous on all fronts and I consumed more alcohol than I have in a while. Waking up the first time Saturday morning was not the best. Luckily I wake up super early so was able to go back to sleep before we had to go down to the morning breakfast and check out of the hotel.

Which was a good thing because I had an active day ahead of me on Saturday. I was able to get home and run some errands and then I was off to run. Tapering down and Saturday’s mileage was just 4 which turned in to just under 5 also paced just under 9 min miles. Taking it easy? Meh. I was just listening to my body and the pace felt good. 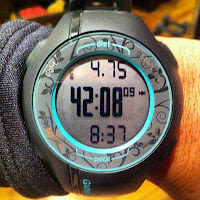 I should probably also mention that the whole rest day Friday thing didn’t quite happen. I wound up running 5 miles in the morning…intervals on the treadmill. I have issues. But that workout was more for the fact that the dress for the wedding was skin tight and I felt a sweaty workout was in order.

Anyways, on Saturday I was also trying to “rush” because I had been called upon to play 2 touch football.

Apparently the thought is that I work at the NFL which means I may be a ringer. Not so sure about that, I felt that the majority of the time was just spent running around at first aimlessly until I got the hang of it. A lot different “playing” football and understanding versus watching. But I made a catch blocked a pass to the end zone stuck with my girl and felt that overall I wasn’t awful.

By the time I got home from all the activity in a slightly hungover state I was ready to get in bed and just chill the heck out. Especially since I had the NYCRuns 10 Mile on Sunday morning.

I love the 10 mile distance. And this worked perfectly into my marathon taper. My training schedule called for 12 miles on Sunday. So I woke up (so late that I quite literally RAN to the PATH station to head into the city) and upon arriving in the park started running to get those first couple miles in. I was on a bit of a time constraint so I was 100% ignoring the whole “take it slow” thing that I am supposed to do for the long runs. I started out pacing again around 9 min miles and got those 2 in with a few minutes to spare before the race began.

I really appreciate the NYCRuns races. I like to do them as an alternative to the NYRR ones which at times are just crowded and annoying. I think that the group over at NYCRuns does a great job. The prices are decent for the races and I like that they are smaller. For example yesterdays was capped at 500 and sold out.

So without much fanfare, right around 9am we were off and running. I went out faster than I would have liked but was having a problem toning back the pace. I don’t think it is AS important for the shorter distance to go super slow like it is for a 20 miler but then again since I haven’t ran my first marathon just yet I will let you know if I taper properly or not!

The first couple of miles I was just cruising along quite honestly trying to decide how I planned on pacing this race out. For a good 20 minutes there I did have some intent on going for a PR but then decided that was probably not the smartest and just settled on a pace that was just slightly hard.


A side note: I can totally feel the difference in sustaining speed. I do not think I could run a half right now and beat my PR from November. Then again I am not rested at all but still that just doesn’t seem feasible right now.

Once I decided to not be a moron and push for a PR I actually stopped fully to fuel a few miles in. Water and a Chocolate Raspberry Roctane, which are seriously like crack. I took my time stretched a bit as well before taking off again. I should also note that also not shockingly I was not properly fueled for a long run in general. I had half a packet of Gu Chomps for “breakfast” and had that hunger feeling starting at about 3 miles in to the race (5 total) that would not go away. But on the other front, my stomach was amazing throughout this run! Which is always encouraging. I didn’t eat any crap during the week. Even at the wedding there was no dessert (because quite honestly I was WAY more interested in wine and dancing) and I have been keeping the eats clean and healthy. It really isn’t rocket science for me and my body. If I treat it well with what I put into it, it cooperates (for the most part) and my stomach does not rebel.

I was feeling good…then we got to the West Side (the race began on the west side and headed east around the park skipping Harlem Hill and using the transverse to cut across, for 2 loops). Those damn rolling hills. I was feeling it. I could tell that my legs were heavier and not rested one bit. I figured that this was the time to work on keeping the pace consistent. While there won’t be hills during Miami I am POSITIVE there are going to be points when my legs are feeling a little bit like lead.

I said a prayer as we finished the first loop and was happy for some flat terrain for a little bit. Cat Hill was once again a bit challenging and I felt like I labored my way up it. I was running on pace with a few people including an elderly man and my focus was just to stay with them for the duration or pass them but not let them get out of my distance.


As soon as my Garmin hit 10 (8 into the race) I finally felt like I was in the clear and was kind of ready to be done running. Of course had to tackle the West Side still but when you know you are running for less than 20 minutes in my head I am basically done.

I stopped once again completely to fuel up with another Gu and water and then took on the remainder of the race. My pace was pretty consistent throughout and during that final mile I pushed it to finish strong.

Not too bad. Especially considering I fully stopped two times to fuel up.

I finished grabbed some water, Gatorade, bagel and apple and booked it on out of there back to Hoboken. The weather was very weird – it was kind of misty but not cold. I was overdressed for the race. I had worn cold gear tights and a singlet with a long sleeve shirt over…I was sweating up a storm. I knew I was going to be warm and probably should have taken off the shirt I had over. So after I was a sweaty mess and then a cold sweaty mess.


I was happy that I headed home straight away because for the next few hours – my stomach was a disaster and a half. I was glad that it decided until I was home to go crazy but then I was also nauseous (pretty sure from the lack of food) and literally shoveled a sandwich in and then curled up to sleep it off after I showered.

And then spent the rest of the day lounging and being a bum. Which after quite the eventful weekend was pretty glorious to say the least!

And now, I am done. Rather long post, yikes! Hope you had a great weekend, I fully intend on taking further advantage of this “warm” weather we are having and doing more of my runs outside this week.