Everyone would do it.

That is one of my favorite quotes when it comes to marathon training.

And it couldn't have been more applicable today.

I had a feeling that those 10 mile days that I was banging out all week long and a 7 miler at half marathon pace yesterday would come back to bite me in the ass.

I let myself just kind of ease into the day. No alarms, I am trying to let myself get as much rest as possible since I am clearly pretty exhausted between work and training at this point in time.

I didn't get myself together until after 11 this morning. My bad.

I also didn't eat a legit breakfast just a pack of shot blocks as I have been doing before longer runs recently.

I was finally out the door and off running. I also stupidly didn't account for the fact that I was about to conquer 20 miles in mid day Florida sun. So prepared.

The first few miles I was just trying to settle into a groove. At about mile 4 though I realized that holy shit (pardon the language) I was pretty hungry. I had to wait until mile 6 to have a gu because I needed to be at the water fountain.

I took a roctane for super caffeinated powers and it did help a bit but I knew this would be a rough run.

I was pretty much hungry the whole time and was just counting down the miles to get to the halfway point and over that hump.

I took another gu at mile 10 and again I used the espresso since it has twice the caffeine. Helped for a bit but at this point I could tell I was getting really dehydrated and kind of cursing myself for being so dumb.

My legs were slow I could tell that they were overloaded. Plus I could not hydrate nor had I fueled properly.

But I kept on pushing on. I know you are supposed to run long runs sloooow but seeing my pace at 10 and over just really got to me mentally and I was feeling like a failure. Stupid I know.

I took the final gu that I had brought around mile 14 and just focused on staying hydrated.

I let myself take a couple walk breaks because I was feeling a tad light headed but other than that once I hit 16 I just wanted to rock it to the end and be done. And after what seemed like eternity I was home and 20 miles were DONE.

And all I could think about were: water, a peanut butter sandwich and getting in the pool. Which all happened within a few minutes of walking through the door.

I learned a few lessons today.

Distance running is no joke and to not be a moron and not plan out your fueling strategy. While in theory I used the same I did for the 18 last week, I wasn't accounting for the fact that I have not run in heat and humidity in quite some time. My body was already pretty beat up. And also I wasn't starting until mid day I should have had a proper meal for breakfast prior to the shot blocks.

Also sunblock. I have acquired some unbecoming tank tan lines. 3.5 hours in mid day Florida sun will do that. Argh.

The best news - I didn't stop AT ALL for the bathroom. Not once. Stomach was amazing today. I couldn't believe it.

On another note. I have not gone to the bathroom since before my run and have probably had a gallon of water (tmi but whatever). I am a tiny bit concerned. Hi dehydration nice to meet you again.

But all in all. If I could accomplish 20 today in less than ideal conditions. Tired legs. Not properly fueled. Then I can't wait to see what I pull out for the marathon after a full taper.

I couldn't be more excited (and yes I know my excitement basically escalates on a daily basis - 5 WEEKS!)

Another successful training day. So proud of this. 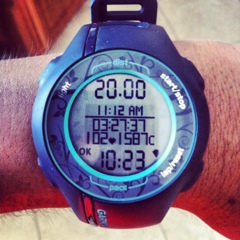