First, I would like to have a moment to just enjoy this:

This morning, I ran 10 miles. For no reason in particular other than I was awake a little after 5am and had nothing to do, had planned on a run, and was heading out the door at 5:30 and had until after 7:00 to run. So figured hey, it is totally a great decision to bust out a long run today! You aren’t running a half marathon every Sunday, let’s go ahead and do some high mileage.

This was one of those runs where body, heart and head were all in different places. My stomach felt queasy and nauseous the majority of the run. Thankfully my favorite bathroom is always open in Weehawken at the track (TMI, sorry, but as we’ve seen big component of my training/racing) so that was a saving grace. But then I actually felt like I was going to throw up on top of that. It was just lovely. My legs wanted to run but at the same time, I just felt sluggish (this has absolutely NOTHING to do with the half jar of pb&co chocolate dreams I consumed for dinner; absolutely not). But my head and heart were both 100% invested in this run. I was listening to some great mellow music (Jonathan Clay – a new artist to me, old albums, but LOVE). And I was enjoying the dawning of the day. 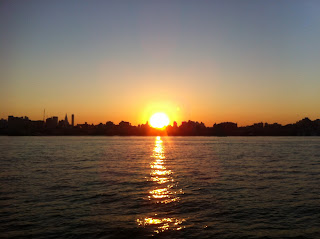 I kept the pace pretty moderate. I felt slow but I also held back because I knew I was being relatively stupid in general with a longer run especially if planning to keep my half on Sunday under 2 hours again. But at the end of the day (or, errr, beginning I suppose) it felt great to have accomplished that before beginning the work day! 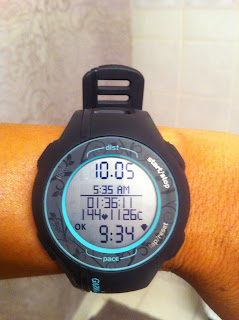 Is it just me or does anyone else lose their appetite when logging a lot of miles/after long runs? I have been trying to eat today but am finding it really difficult. I managed a greek yogurt, banana and strawberries but the thought of lunch is just not appealing. Plus I didn’t eat before/during the run. Have had plenty of water + nuun though to attempt to stay hydrated! My body has been really off this week. I go from feeling awesome to the polar opposite several times throughout the day. It is just weird.

But happily, it is Friday. I have an awesome weekend, albeit super busy, ahead of me and am looking forward to it all.

Hope everyone is having an awesome Friday!
Posted by Gianna at 2:42 PM