I guess it is about time to recap the Chicago Marathon. I have a lot to say and also really nothing much minus it was miserable. Shall attempt to keep this as short as possible.

The weekend started promising. And by promising I mean a few hour flight delay that was kind of annoying. So I wound up getting to Chicago a lot later than anticipated on Friday night.
Saturday was spent sleeping in, doing a short shakeout run – side note, it was so gorgeous out and I felt great! – then went to the expo and to try and meet up with some people. Expo was ginormous but well organized and the packet pick up went smoothly. The only annoying part was the shirt, I was totally disappointed (I am not one big on swag in general but NJ, NYC, Hartford, West Palm Beach, Miami have all given great shirts I just expected something similar from a major – they seemed like an afterthought).

Anyways Saturday night we wound up at a great Italian place Quartino's. Sadly I stuck with plain food all weekend (bagels, turkey sandwiches, bananas, pretzels, blah) and just had margherita pizza and picked cheese off. However when we left my stomach was kind of gurgling. So I ran down the street to 7-11 and said some prayers as I ate tums.

Sunday woke up – on my own thankfully – because I set my alarms to PM instead of AM. Awesome.

Ate a Clif Bar and had some coconut water and then got ready. Going in without any major goals and just planning to run it really did not hit me until that morning that I was running a marathon. I very much had a no pressure no nerves calmness going on.

I knew when I woke that my stomach would probably make me stop a couple times because I couldn’t really “go”. But whatever I am okay with that kind of par for the course.

We got to the start area to check bags probably around 7:20 so by the time I checked my bag I HAD to hop in my corral or else get stuck all the way at the end. Being assigned F at the front of Wave 2 I really did not want to go all the way to the rear, which meant holding it in and not being able to hit the bathroom.
As we were counting down the minutes to the start, all of a sudden I got REALLY emotional. Like tears and a little crying emotional. I did a total WTF to myself baffled where that came from…but then the gun went off and we were walking to the start! And THEN they played “Born to Run” and some more tears came (and excitement)! A few minutes later we crossed and I was off!
First thoughts = ugh I have to pee. Which meant all I could look out for was the first set of porto-potties. About a mile and a half in they came up and I sprinted to them. Took care of things and then was running back out and SO HAPPY I ran into Emily! And got to chat with her for a few minutes before I told her to go off and chase her sub 4 marathon (and she killed it!).

And after she left was when things started going south. My stomach just never settled. I stopped about for the bathroom shortly after the 5K and it was upset. I was trying to not panic yet but I wasn’t amused. A mile or so later I knew I had to stop yet again.

I had barely enjoyed a second of the race and pretty much knew I wouldn’t for the remainder.

I started texting my friend Maria to see if she would be at mile 10 for the first stop and thankfully gave me something to look forward to. I was miserable. I was stopping at each stop each mile. I tossed away any time thoughts I was in so much pain.

Basically felt like someone was holding on to my insides and squeezing as hard as they could. I would go to the bathroom run for a bit before knowing I had to walk.

Yes walking began at mile 8. I texted the boy then too and was already saying I was ready to quit. Was texting my sister as well…a marathon is daunting but I knew how terrible it would be feeling this way.

I missed my friends cheering at the first stop but luckily knew they would be around 16/17 which again gave me some motivation.

When I finally saw them I couldn’t hold back the tears. I was miserable. I gave her my Garmin and continued on my way crying. My legs were feeling good to run but I just couldn’t for too long and at this point was losing the will to even try.

I can barely tell you anything about the course. Minus great crowds. The people were fantastic! I tried to take it in but was pretty miserable as my race photos prove: 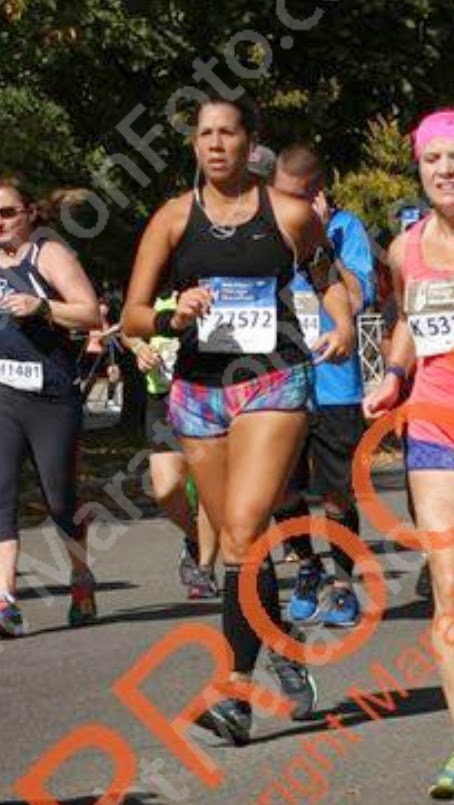 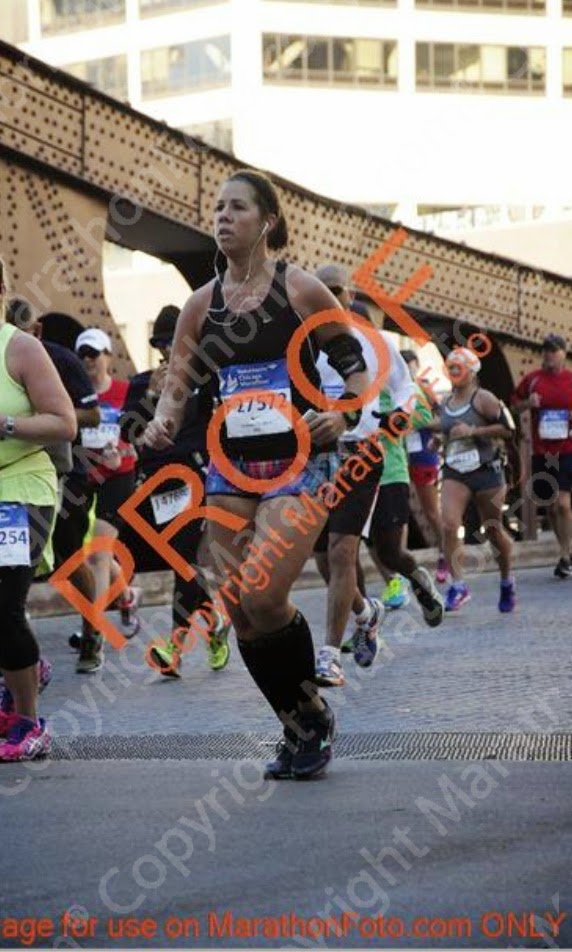 I got the text of where they would be cheering again around 23 and was happy to have something to look forward to. I also stopped an helped a man who went down with leg cramps. Helping someone else made me feel like I salvaged some good from the experience.

Also seeing our friends Dad catch up to me who was running his first marathon and rocking it made me happy someone was having a good race! Until mile 20 I wasn’t sure I could or would even finish. It took every ounce of strength to stay on the course. After seeing our cheerleaders the final time I was so ready to just be done. My stomach was doing better (relative I just was incapable of shitting anymore, you’re welcome) and I finally turned on my music and ran as much as I could of the last bit. I have never been so happy to see a hill in my life as I knew that signified finishing this self-imposed hell.

I crossed that finish and I think I may have cried a little I was so happy to be done.

In a personal worst: 5:3x (I honestly do not know my official time I refuse to look but know it is around there) an hour slower than my slowest. And really don’t care.

That race was straight up survival.

And now I have to do 26.2 twice more this fall. What was I thinking?

My stomach still hasn’t returned to normal. Although I did get through 12 miles over the weekend (didn’t revolt until the second I stopped). But I am hoping that it settles down. And soon. If NYCM is the same I do not think I have the mental strength to repeat that.

So that is my recap. Don’t ask me about where I ran or what I saw. I basically spent 5 ½ hours trying not to shit my pants. A few memories but honestly I didn’t get to enjoy more than maybe 3-4 miles. I will say – AMAZING course support. I would run the race again just because of the ease of it all. Logistics trump NYC by a million in my opinion.

And if one more person tells me a story of how they run through it and I should just try that I will throttle them. You don’t think I TRIED. Sigh.
Posted by Gianna at 1:27 PM