It is no secret that I am a distance junkie and way prefer the steady "easier" pacing of a half marathon to short distances.

But I am trying to get faster and as a coach friend has said, 5K's are a great way to gain "sneaky speed" by racing them periodically.

When one showed itself in my town and I could run to and from it I couldn't say no. Until the forecast called for rain, that put some serious doubts in my mind. But I woke up Sunday morning and it said rain was done, so all was good. It was go time.

Being the fantastic googler/run nerd that I am I input last weeks half to estimate what a goal time should be. It spit out 26:30, 8:30ish miles for me and I made that my loose goal.

I ran the 2.5 miles to the race and was able to register with plenty of time to spare. I took off all week from running and then ran a few miles Saturday and happy to say that the cross training paid off (spinner/weights each day) - the lingering pain in my glute/hamstring is mostly gone.

Then with only a few minutes to go until the start...it begins to drizzle. By the time the race was going off it was really raining. I have been lucky to never have to race in the rain until yesterday!
So the race begins and my only focus is to find my pace. I was feeling really good and start finding a groove. I was really trying to run by feel so was avoiding looking at my Garmin as much as possible.

The road was also wet and it was windy so I was focusing on not slipping (because leaves and acorns).

I started gaining on and picking off people. I found a woman who looked around my age in my sights and it became my goal to pick her off. Happy to say around 1.75 in I did. But then I was kind of in no mans land. Everyone else was pretty far in front of me and I was starting to lose steam.

It felt like an eternity to get to the cone where we would make a turn around before the final .75 or so. My lungs were feeling it more than my legs but now I started looking at my pace and see it is starting to slip. (and is it just me or is turning around the cone just a killer to your momentum)

Once we turned I am just giving myself pep talks. The final .25 or so is a very very cruel hill to have at the end of the race. Then, a man passes me and it was just what I needed. I told myself to stay on his heels. He was the motivation I needed.

I am chugging along the best I can but still feel like I am running in quick sand. See the finish line and try to kick it.

I knew it being a small race I had done well and probably paced. Unfortunately the computer got wet and preliminary results were messed up. I wasn't on them but looked like I had placed 2nd. Eventually they apologize that it will take longer to get the results and it will be emailed etc.

Then I got this email. First place AG win!!! And apparently I somehow added 8 seconds on my Garmin. Can't wait for my trophy, only my second one. 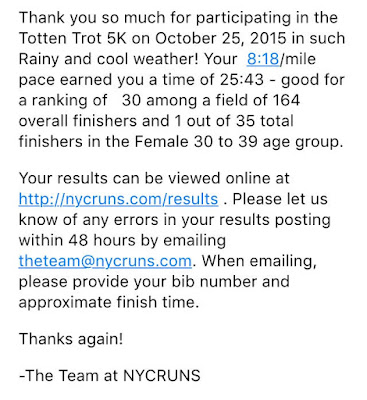 Overall, I am happy. I beat my goal (this is not a PR though) and I think on a flatter course in better weather I can do even better. My mental game has been on point the past few races as well. Not to sound corny but I think everything I have dealt with health wise the past year has really helped me on this front.

And now, maybe just maybe I have found another small 5K in a couple weeks to test my speed out at again.