Another NYCM in the books!

If you couldn't tell I was a little bit doom and gloom about this marathon. Due cause, Chicago was a nightmare, and too recent to not have on my mind. I would get twinges of excitement then think a couple weeks back and cringe.

I was going in with zero expectations. My stomach was a mess still and I was out of ideas of what to do, and won’t be going to the doc until next week for the real testing to begin. All I could do was to eat as plain as possible and cross my fingers and hope for the best.

I spent Saturday relaxing as much as possible and thanking our lucky stars that it wasn't the weather for Sunday. But then was seeing the forecast for the winds…but at least no rain, right?

Enter Sunday morning. Wake up to find out that there won’t be heated tents anymore in the Start Village with Team for Kids. Not amused.
I had for once gotten everything ready to go the night before so getting out the door at 5 was a breeze. I couldn't “go” but my stomach felt okay. Ate my first plain roll on the way to the city. Then got on the TFK buses and was on my way to SI – I miraculously slept the whole way!

I spent some time with the TFK team ate another roll and then went to meet my running bff Tara who was in the same wave, same color, same corral as me. Talk about luck! We spent some time huddling to stay warm until without ceremony we heard the canons and were off! Kind of. Not without a few photos first! 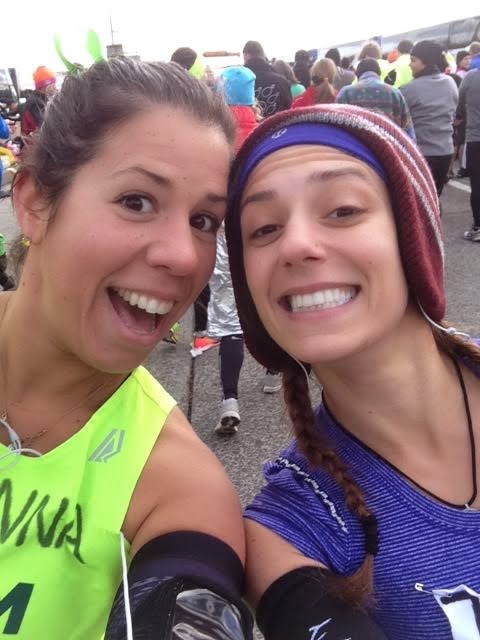 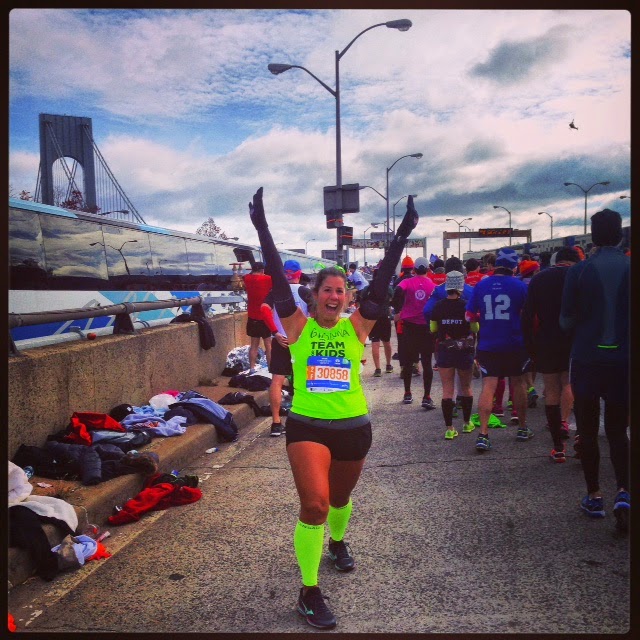 I couldn't feel my feet and the wind on the Verrazano was so awful it wasn't hard to make sure you didn't go out too fast. As I was trying to make sure I didn't get blown off my friend Barbara came running up behind, love in a race so big you can find one another.

Tara took off after about mile 1 and Barbara and I stuck together. My legs were not feeling loose at all and maintaining a slow cautious pace wasn't too difficult. Quite frankly even a slow pace seemed like too much effort. I started guesstimating finish times but knew it would not be under 4:30 and really didn't think too long and hard about it.

We stuck together chatting and enjoying the crowds. So much love right from the start, the crowds make you feel like a rock star. DO NOT run NYCM without your name on your shirt. Seriously. People cheer you on like they are your family out there start to finish.

Mile 5 I had to peel away for the bathroom. I was fine not hurting, but finally had to go (hadn't all morning but nothing like a few miles to get things moving) this stop maybe took 2.5 minutes even waiting in line. Spoiler alert that would be my ONLY stop for the bathroom all day! (Edit never mind I remembered I stopped after the Queensboro Bridge real quick to pee)

I was playing it pretty safe, I was walking through most water stops drinking a little and keeping cautious with how fast I was running. I would go through spurts where I would feel amazing and then equally like ughhh running isn't fun. I wasn't trying to be a rockstar out there so pushing it was not on the agenda.

I was focusing on when I would see people and started to be on the lookout. I saw Leticia at mile 8 and was such a boost. Then I was focused on #Mile14 and seeing the peeps from November Project. A nice infusion of energy as I prepared for the Queensboro Bridge.

Going onto the bridge I was just trying to maintain slow and steady and not run too hard of an effort. But man did the bridge feel eternal. (and seriously the whole time I kept thinking - was it this HARD last year - meaning the whole course in general). Also I felt my left calf starting to strain but really low so was concerned it was my achilles. I tried to stretch it out but realized stopping and starting hurt. I got in my head a little bit at this point. Luckily 1st Ave gives you a LOT of distraction and I also knew to be on the lookout for a bunch of people.

I should mention I had been deathly afraid to fuel so was STARVING by now and this is 100% the reason for the god awful brutally debilitating cramping that would ensue the rest of the race. When they were giving out the gels I figured if my stomach was okay for now I would go ahead and eat one. Then saw the magical med tent and decided to stop.

Those people are magic. I got salt packets and salt water and calf stretching and massage. Just touching my calf was so painful. He told me to just be careful and several minutes later I was on my way. This is the point where I am in love with the crowds even more. I really really wanted to walk but was pushed to continue on. Slow as shit but continue nonetheless. I was still walking through water and basically starting to eat any and everything that was given out. Then as I was heading through the Bronx the right calf starts to cramp up which led me to hitting another med tent at mile 22. More salt, salt water, asprin and massage before I was off again. Both stops were worth the relief.

I knew a bunch of people would be along 5th and in the park so I was just trying to keep busy looking for them and finally saw Beth and pretty sure I asked if I could just stop running at that point, haha!

As I made the turn into the park tears came to my eyes. A mixture of knowing I was on my way to the finish as well as just being overwhelmed by the day. I am not the most emotional person in the world darn these marathons really get me! I love the running community.

I saw my friend Mike or rather heard him and then just focused on getting to the finish. I was on a mission to finish in under 5. I had done the calculations with about 10K to go (which took so long because long runs + math = impossible) and knew I would have to keep at it. Basically was just telling myself one foot in front of the other over and over. When I saw the 800 meter sign I knew it would be close. I was totally hurting at this point but oh so determined. When I got in the park I knew I had it and was just trying to go as fast as possible (totally not fast at all) to the finish.

And boy did I fight to that finish. I thought on a good day 4:30 was possible (4:29 last year) but the winds made it a whole new ballgame.

After the 5:34 disaster at Chicago. Under perfect weather conditions on a flat and fast course this proves to me I was due for such a better day there.

My garmin was totally off I lost a half mile on the bridge somewhere but from the online tracking can see the stops and such. But honestly NYC is tough. A few weeks after Chicago and I was hurting. I was riding the pain train hard for the last 10 miles or so. I never really hit a wall but I was in a world of pain. 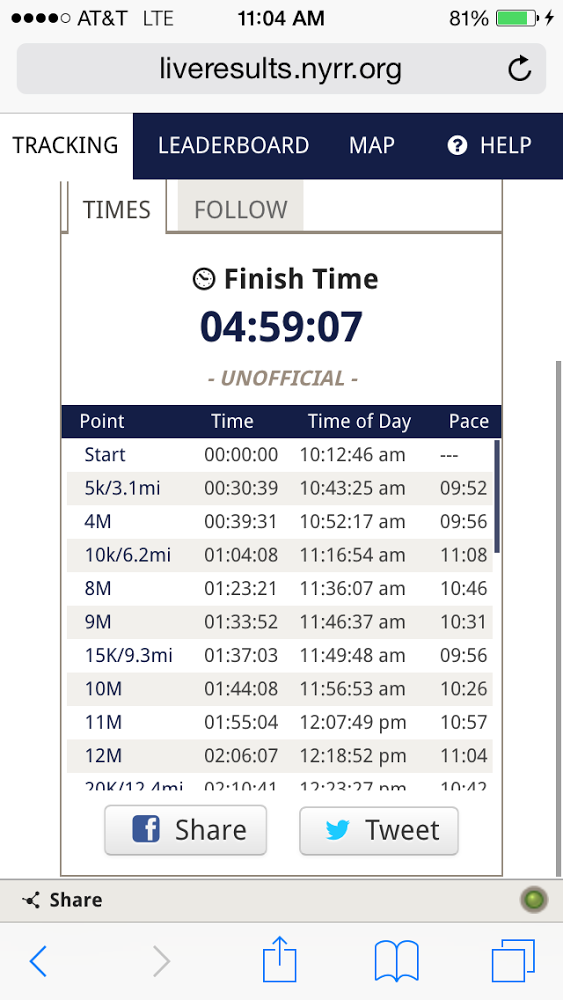 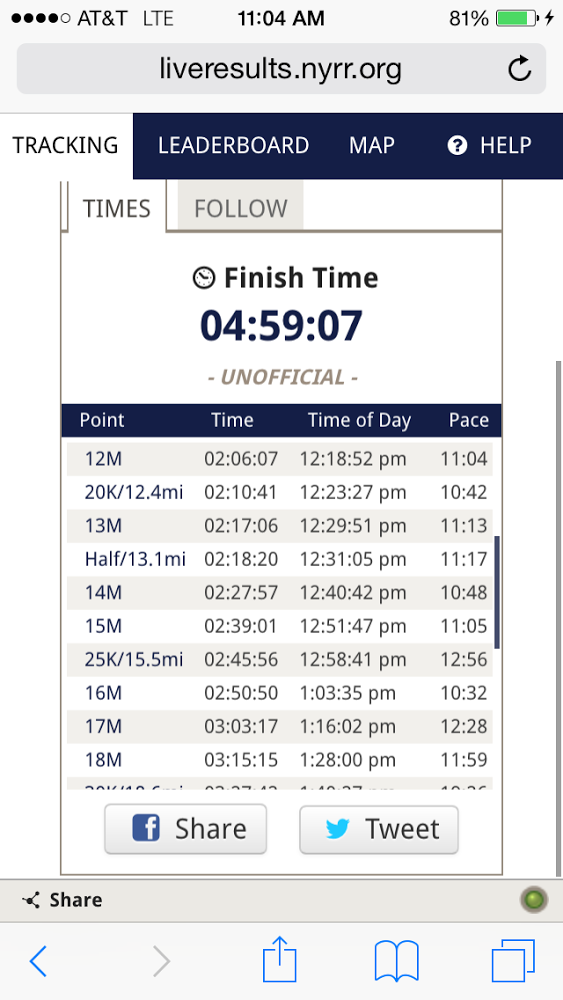 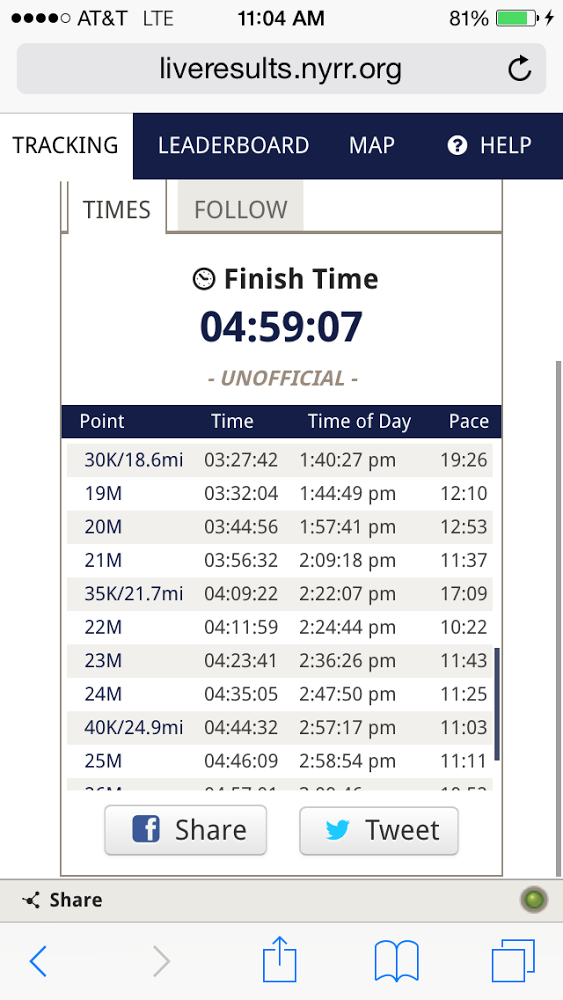 I may not have had a good race and may have hurt, but damn it I love NYC! (although seriously break my leg if I try to run it again next year).